For this month's Paper Pros challenge the theme is Spring Flowers. My project uses the Tag Book Pop-up die set with the pop-up parts cut from a transparency.

I cut the tags and hinge from a sturdy white cardstock and then used Distress Oxide inks to turn them into a mottled blue. I added a cheerful piece of green polka dot paper (KaiserCraft, from my stash) to the outer ends of the tags and some pink gingham ribbon across the seams. 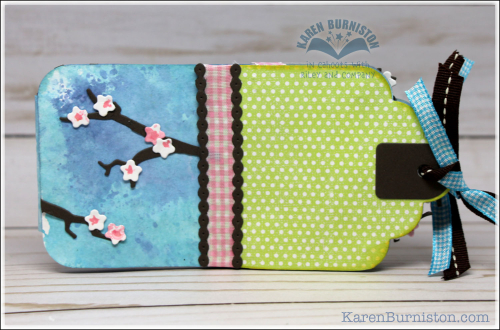 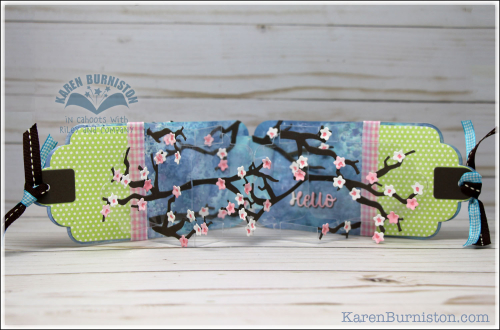 The Cherry Blossoms are made using the Tree Pop-up die set. I chopped up several trees into branches and added them to the clear panels and to the background of the card. 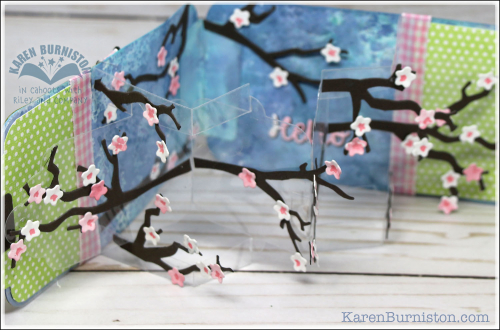 The Tree Pop-up die set comes with a die to cut 6 flowers at a time. I cut them from white and also from a pink Distress Oxide background. After die cutting I added pink centers using a paintbrush handle and pink ink. The "Hello" greeting was die cut from pink and brown, layered and added to the background. 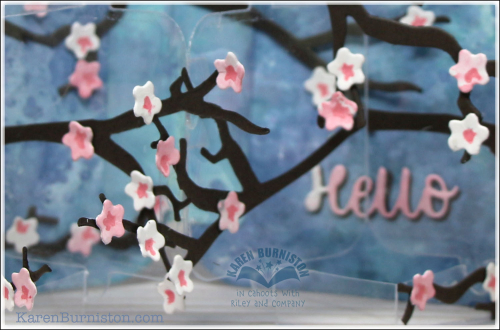 Here is the assembly video for the Tag Book Pop-up:

Make sure you check out the fun Spring Flowers cards by the other Paper Pros.

Here are shopping links for the items I used. 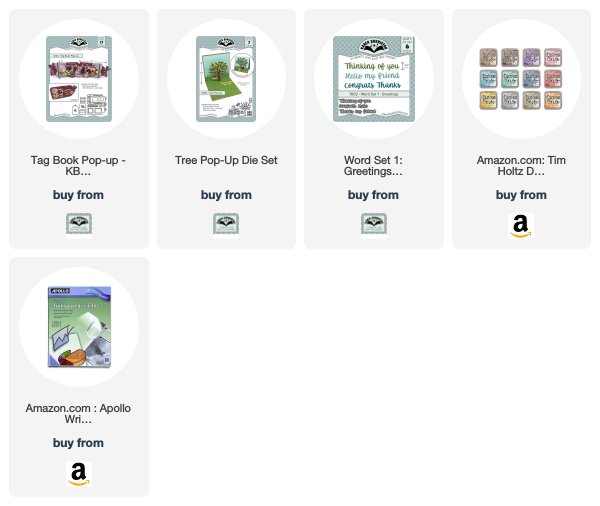 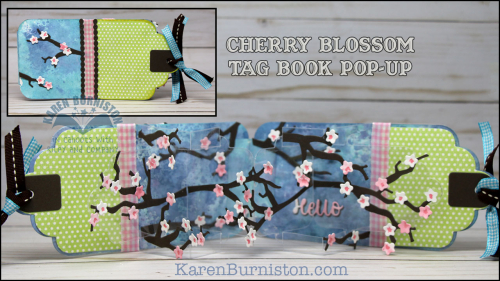 Yesterday I spent a great day at Croppin' Bug for their annual retreat and education event. In between my morning class and the evening Make 'n Take event I got a chance to join the croppers and make something JUST.FOR.FUN! (I know!)

The first step, naturally, was to go shopping. I spied an adorable piece of paper from Doodlebug's "Kitten Smitten" collection and knew it would work perfectly with the Twist Panel and Cat and Dog die sets. 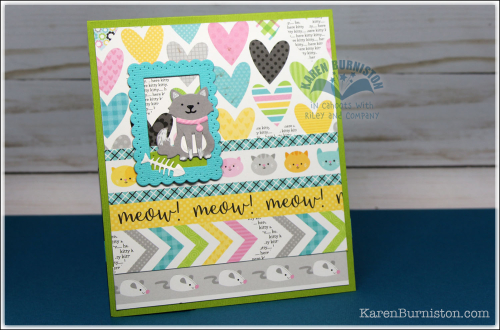 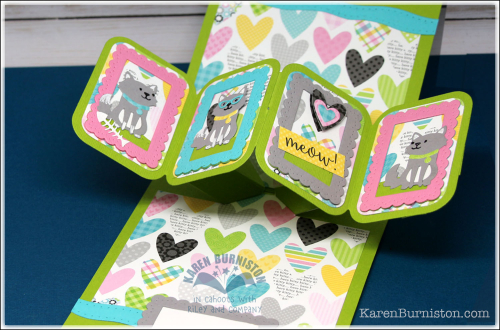 To make the cat looking to the side instead of forward, I simply moved the die over and used the built-in stencil feature to draw in the face off-center. I added a pair of sassy spectacles to the middle cat, using Tiny Accessories 1. 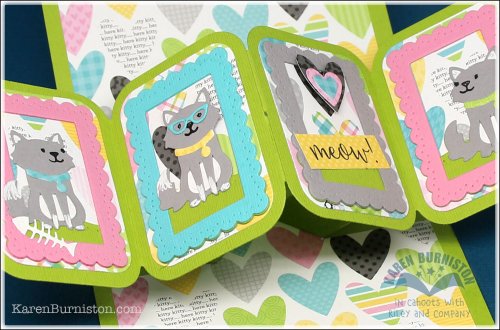 I made the wavy borders using the edge die that comes with the Twist Panel set. You can learn how to use these die sets by watching the assembly videos below:

Here are shopping links for the items used in the card: Welcome to our April Designer Challenge with a theme of "Hip to be Square!" I challenged the team to use squares in their projects this month.

You'll see lots of inspiration this month for using the Spinner Square Pop-up die set and others. For my project and video I had an idea to do a double window card with the Spinner Square so that you would see all the overlapping layers in the closed position and then the scene would reveal itself as the card opens.

Watch the full video tutorial below:

In keeping with the theme, I chose a square card. This card measures 5x5 and will mail for a single stamp in an A7 envelope. In the closed position you can see palm fronds behind the sun. 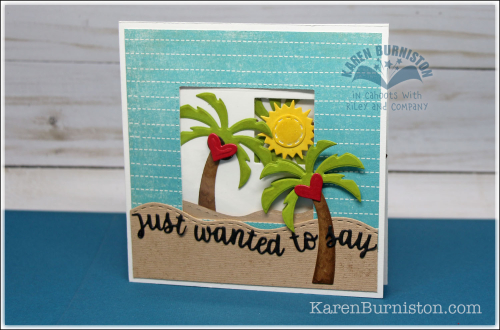 As the card opens the spinner arm moves from behind the sun, revealing another palm tree and a hitchhiking crab, holding a heart. The sun appears to be suspended in the opening, attached to a transparency. 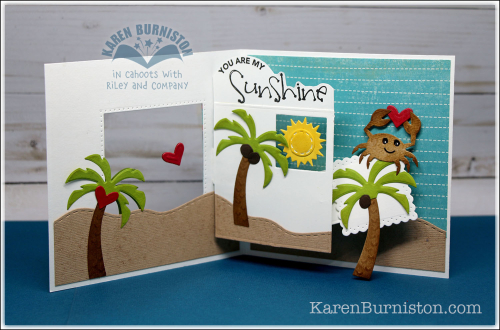 I challenged myself on this card not to fill every inch of available space with color and elements. I wanted it uncluttered, even though there's a lot going on. For the crab, I went with a brown color scheme so the heart would really stand out in her claws. I added Wink of Stella glitter pen to the crab and to the sun for a little sparkle. 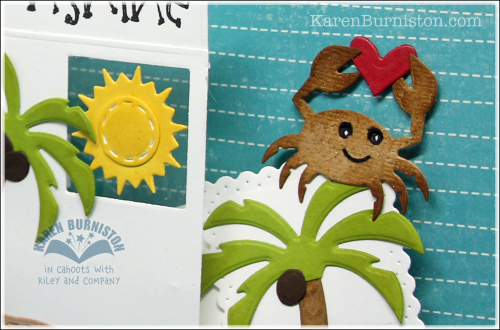 As I mentioned in the video, I encourage experimentation with this technique. My original idea was to have the sun atttached to the blue paper in the background so it would only be revealed when the card opened. In that case, as the square moved out of the way you would see the sun through the second window. However, the sun looked a little small and lost in the background, so I moved it up onto the transparency as a floating element instead.

Another idea would be to have an animal in the background and another on the spinner arm so that one moves out of the way and reveals the other.

Oh, and one last idea - you could remove the transparency from the small window and put an object on thread across the opening and then wind it up and close the card. Open the card and that item spins in the window! So many possibilities!

Karen Burniston die sets are available at independent and online craft stores throughout the world. You can also shop on our website. Here are links to the items used in the video. The blue striped paper is an older Echo Park design (retired) from my stash, so just substitute something similar. Get ready for another round of amazing inspiration by the talented Design Team. In each case, I encourage you to click their name, which will open their individual blog posts in a new window. You'll be able to see more photos, tips, full supply lists, etc.

Fran Sabad chose fun hip colors for her soda pop Spinner Square card. I love how fresh and exciting this card is - such a great mix of stamps and papers. 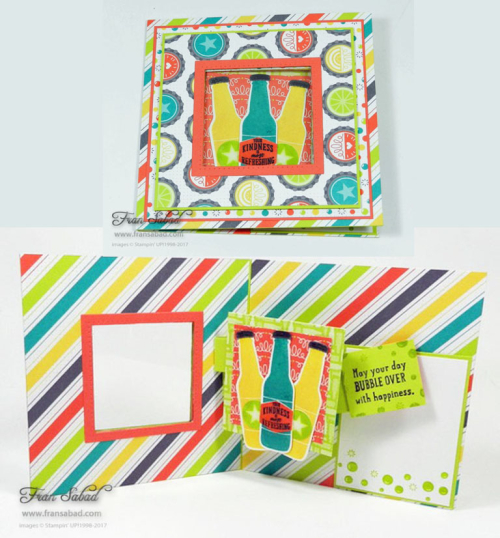 Kelly Booth had a very clever idea to use square panels on the Twist Panel die set instead of the included rectangles. She substituted decorator dies from the Spinner Square set to give a similar look, but in a very "hippo to be square" way. Also - that coloring! Swoon! 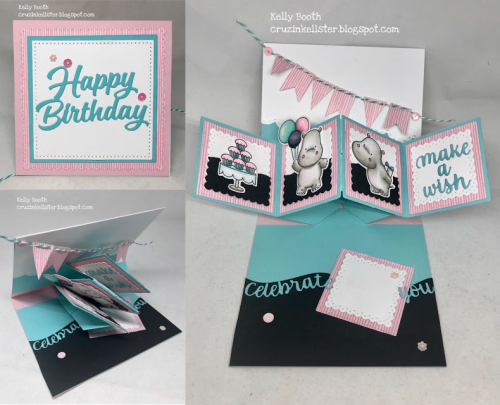 Shelly Hickox is the queen of fussy cutting Graphic 45 paper into individual elements that she then combines in amazing ways. This Spinner Square card is exquisite. I love how she placed the butterflies so they both spin out on the arm at different angles. 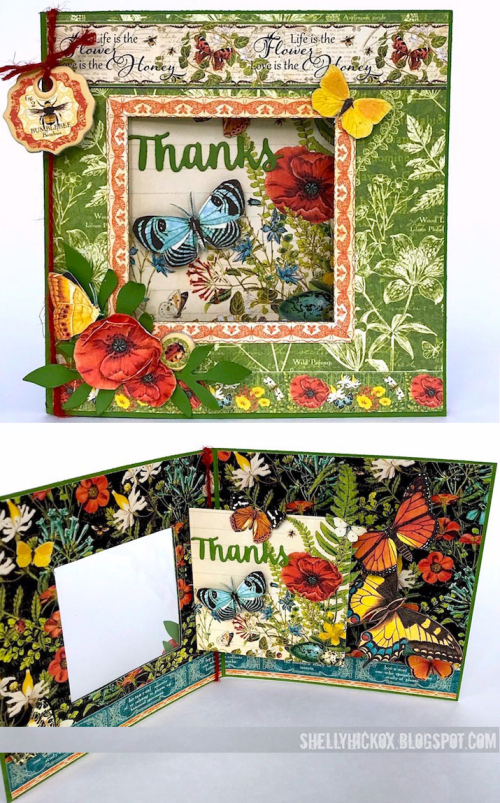 Summer Hills-Painter made this absolutely fabulous kid-themed building blocks Spinner Square card. The coloring on the block people is amazing! I also love the mix of elements in the background as the card opens. 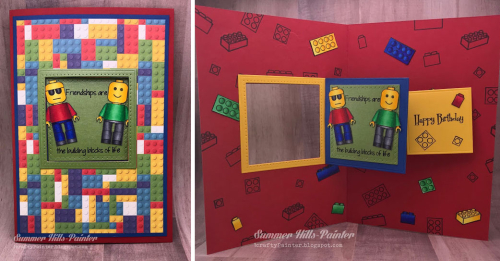 Helen Cryer has tremendous talent for mixing patterns and colors into exquisite cards. For the challenge she used the Charm Accordion and mixed in elements from other die sets for a bright and cheerful birthday card. I love the open frames with items suspended across the openings. Gorgeous! 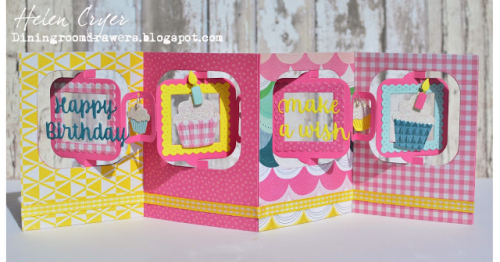 Karen Aicken made this stunning mermaid-themed card and there are so many clever elements. She tripled the mermaid's hair and tinged her skin blue. She converted the shark into a dolphin! Always be a mermaid, indeed! 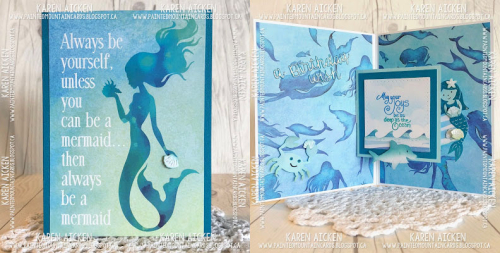 Frances Byrne dropped the mic with this terrific Spinner Square card. I am in awe of all the perfectly placed and colored images and the entire vibrant fun feel to this party. Also notice her fun highlighting of the Number 6 with white dots. Love this! 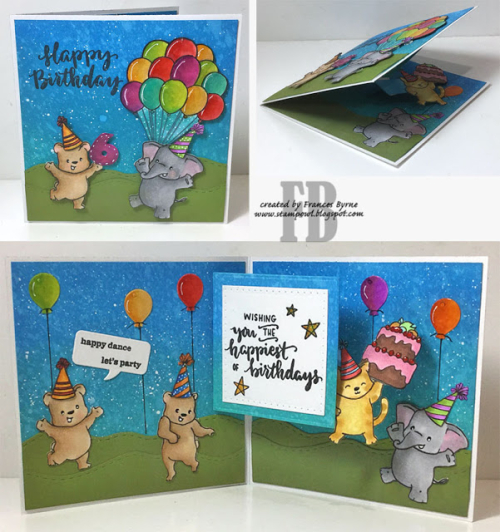 As usual, the team has blown me away with their talents and expertise. Join us next month on Wednesday, May 2, 2018 for our next Designer Challenge with a theme of PARADISE! Can't wait!