Just kitting! (See what I did there?)

On Sunday, 1/29/12, I will be co-teaching a Sizzix class at the CHA show called "Love is in the Air" with Eileen Hull. Eileen posted a sneak peek of her class project yesterday on her blog. She will be teaching with her fabulous new release called "Sweet Treats" and students will make two decorated Candy Jars to display in their stores. (Click the photo of Eileen's project to go to her blog post) 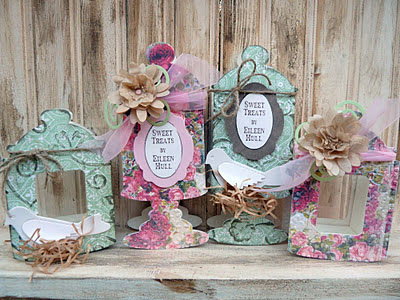 In the second hour of class, we will focus on my new release, called Pop 'n Cuts. For a video preview of Pop 'n Cuts, scroll down or use this link: CHA-W Sneak Peek Pop 'n Cuts 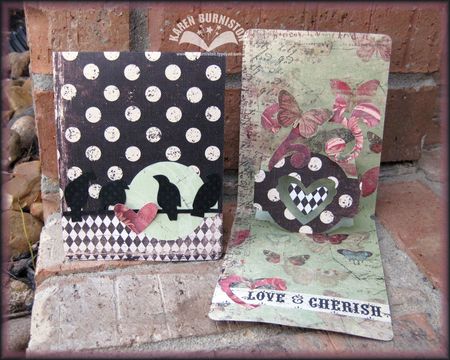 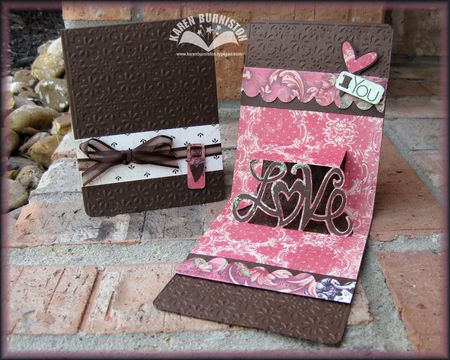 Since we are working with brand new dies I had to pre-cut everything for the class kits. I've been cutting all week and finally had everything ready for assembly into kits. Gretchen came over today to help me pack out 60 kits.

A big thank you to Xyron, who sponsored the adhesives for the class. The Creatopia is perfect for adding adhesive to the backs of the Love Sizzlit word. 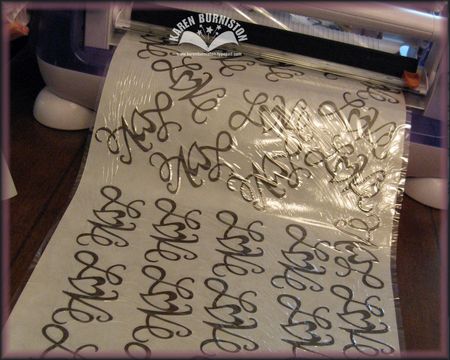 Here is the first half ready for bagging: 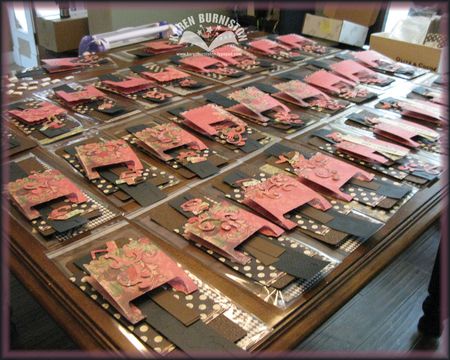 In addition to the kit products to make two cards and two candy jars, students will take home a brand new Sizzlit set from BOTH collections! Thanks to Sizzix for specially manufacturing those giveaway dies for us, months before they will be available in stores!

Hope to see you there!

In just over a week I will be attending the CHA show in Anaheim to demonstrate and promote my brand new release of Sizzix dies!

The best way to understand the system is to watch this 5 minute video:

Pop 'n Cuts will be available in stores this spring. (Exact shipping month still being determined, so I will update as soon as I hear)

If you are attending the CHA show, I would love to show you the dies in person. Here are the times I will be demonstrating at the show:

Additionally, I am teaming up with Eileen Hull to teach a Sizzix class called Love is in the Air that will feature two cards made with Pop 'n Cuts. The class is currently sold out, but sometimes space opens up closer to the show, so check with CHA about registration.

I will also be teaching with Pop 'n Cuts at the Sizzix Basix class being offered Saturday morning. If you are a retailer coming to the show, check with your Sizzix Rep to see if there is still space in that class. It is a free class sponsored by Sizzix, not an official CHA class, so you won't find it on the CHA site.

On the subject of Pop 'n Cuts, they have been in the works for nearly two years, so it is exciting to see them finally come to market. Why so long? Well first, although they resemble Movers and Shapers, they are actually something new. The inserts are part of the function of the card, not just a decorative hole. The manufacturing has to be very accurate for the dies to cut and function properly. Plus, inserts will be sold separately, so they must be manufactured to the exact same size every time so they will fit in the Base die. Although it has been excruciating to wait, I am so glad that everything has been perfected!

Pop 'n Cuts all fold exactly the same way, and it's SIMPLE! Been looking for an easy way to make pop-ups? Pop 'n Cuts is the answer! 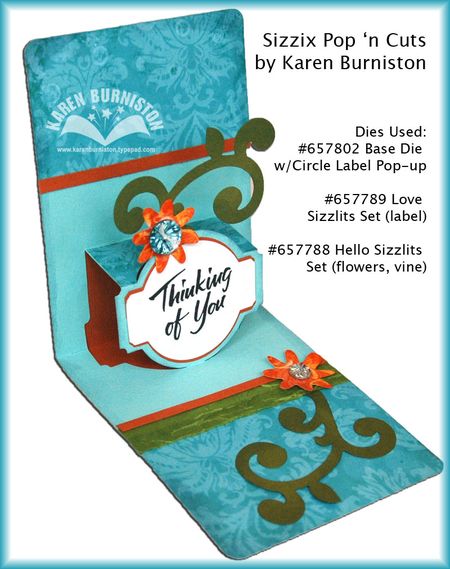 It's a New Year and back to work for me.

In 2012 I will be teaching once a month at Scrapp'n Savvy in Spring, TX. This month's project is layouts, February is cards, and March will be a pop-up mini-album.

To register for the classes, visit the Scrapp'n Savvy website. This first class, the Devotion Pop-up Layouts Class, will be offered next Friday, January 13th, in three sessions. The morning one is full. The other two have spots available.

Both layouts use the IOD Devotion paper line, from Creative Imaginations and Bazzill cardstock. 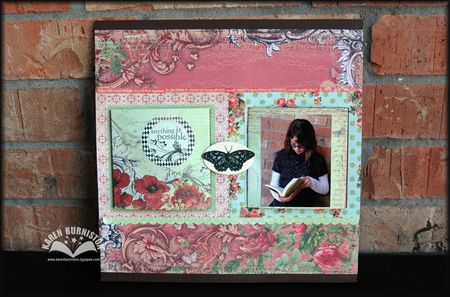 The first layout features two cards that are arranged with opposite folds (gate style) and stay closed with a decorative butterfly closure.

Spin the oval to release the cards: Next, bring the two brown pieces up to the center and they will stick together using hidden magnets: 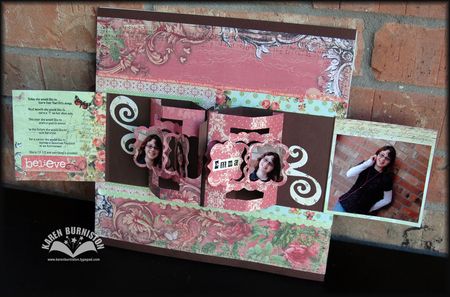 Two Floating Frame sculptures pop up. The Floating Frames Pop-up Die is currently out of stock at Sizzix, but the store will have them for sale after class on Friday!

Here is a close-up of my journaling: 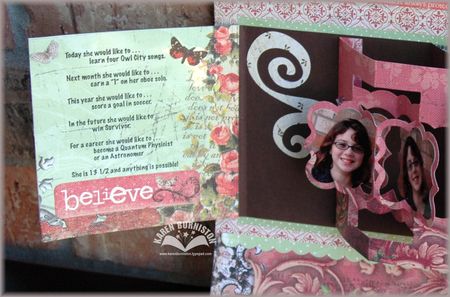 I used pictures of my daughter, but this layout is suitable for more than just feminine subjects. It would make a great Love, Family or Gardening layout.

The second layout we will make in class is: 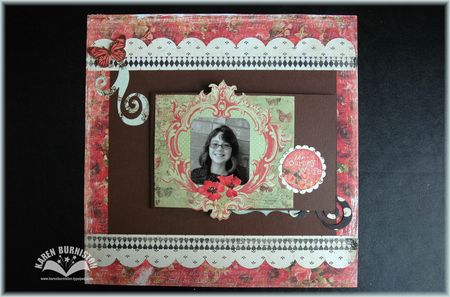 You can definitely add more than just one picture to the front of this layout if you prefer. Open the card and watch what happens! 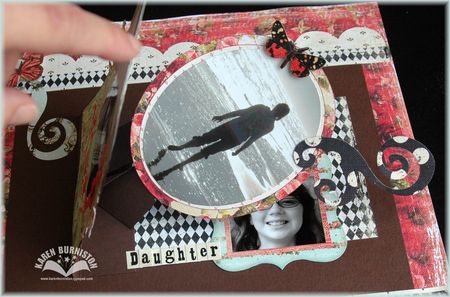 The Spinning Platform die is used to bring up another photo frame! There is plenty of space for additional photos and journaling inside the card: 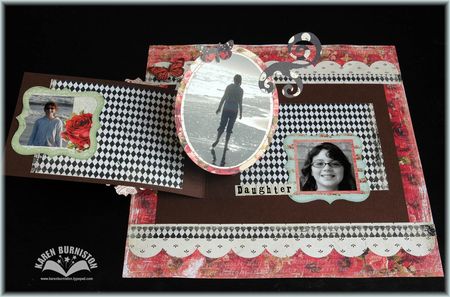 The kit will include all materials to make the two single-page layouts shown above, which can be used together to make a spread.

Another option is to purchase the pop-up dies and extra paper in the store (your handout will include a shopping list) and re-make both layouts again, turning each of them into double-page spreads. Here is how they will look if you double them: 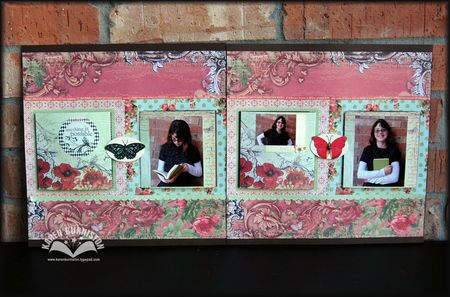 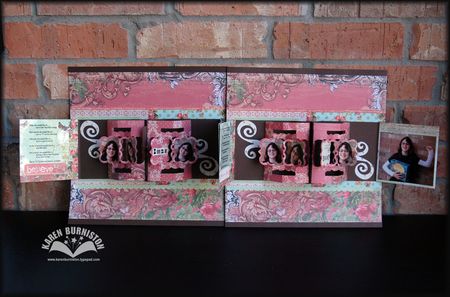 For the second layout, I repeated the same design, but simply reversed the fold location and the swapped the two decorative frames. 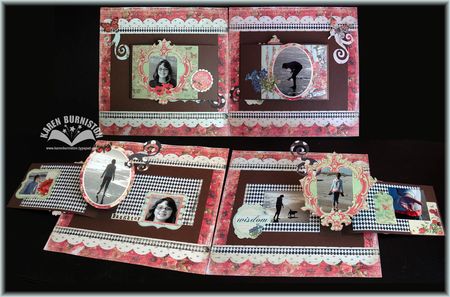 Here are the items that you should bring to class:

Other upcoming class dates at Scrapp'n Savvy are:

Hope to see you there!

EDITED TO ADD: Lizzie asked about the third sessions because they aren't showing up on the SS website yet. The evening session will be 7:00 - 9:30 pm for both this Friday, January 13th (Layouts class) and Friday, February 10th (cards class). Call the store to register.

Mary Beth Martin just sent me a link to her YouTube video showing the STUNNING pop-up album she made for her grandson for Christmas. My jaw is ON THE FLOOR!!!

Thanks for showing off the dies in such a spectacular fashion!

It was so fun to see my friend Linda Fulghum this fall on a teaching trip to Kansas City. One of the things I always say in my classes is that I want to "infect" other instructors with the bug to teach with the pop-up dies. If you're out there teaching with the pop-up dies, please let me know - I'll "spot" you here on my blog to help promote your class. 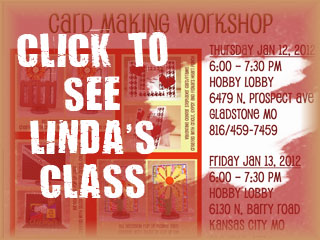 Thanks for using the Sizzix Pop-up Dies in your class, Linda!

Check out this awesome card by Donna Gibson! She used the Scalloped Circle Pop-up, the Celebrate Sizzlit Set, and the Zig-Zag Pop-up. Notice how the Zig-Zag has been split and used on two opposite folds to suspend her banner. BRILLIANT! 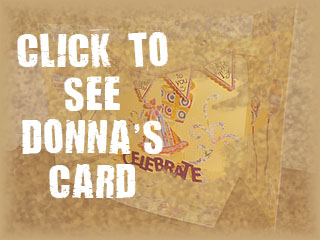 Thanks for showing off the versatility of the Pop-up Dies, Donna!

Well that was a fun week off from life! Heh.

Seriously, though, I'm really ready for 2012, most specifically the children trotting off to school and John returning to work and me getting busy with CHA preparations.

A lot of people asked which charities the kids chose.

They both ended up making microloans through Kiva.org

Karl had $50 to loan, so he chose a fruit/vegetable market in Lebanon. The owners will use the loan to increase their inventory of fruits and vegetables.

Both the kids were extremely happy to know exactly where their money was going and how it would help these businesses grow in other parts of the world. Even better is that the loans will be repaid over the course of the next 14 months and around next Christmas they will have the money back in their Kiva accounts to loan out again.

It was also an eye-opening experience to read the stories and get a sense of how important these comparitively small loans are to people trying to better themselves in places where, for example, the average yearly income is around $5000. There was a loan request from a woman with a coffee shop who wanted just enough to buy a table and some chairs to make a seating area in her shop. Both kids were absolutely beaming after choosing their loan recipients, and agreed that the feeling was better than anything they could have bought for themselves with the money.

So what have we been doing around here for the last week? Lots of board games, lots of video games for John and Karl, lots of scootering around the neighborhood, a little bit of class design work for me, and a ton of reading for Emma.

We also decided to get out of PJ's for a day trip down to Galveston. For a bunch of land-lubbers from Colorado, it's pretty surprising that it has taken us 18 months to make the 90-minute drive to the beach.

They really make you feel "welcome" at the beach: 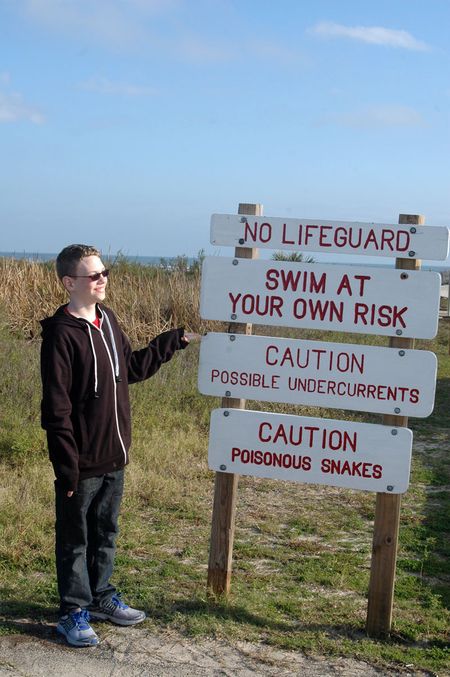 Now you don't necessarily think, on the last day of December, that it's going to be wading weather. In fact, we expected to just stroll up and down the beach and enjoy the sound, smells and views of the water.

But it is, after all, south Texas. And Lucy, we assume, was born in Colorado and had never seen an ocean. So it didn't take long for this to happen: 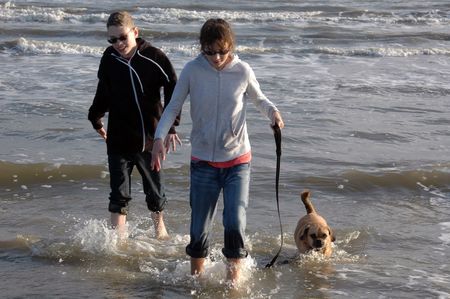 Would anyone care to guess whether the Burnistons took a day trip to the beach armed with, say, towels, changes of clothes, or even, say, several plastic bags in which to store seashells and wet shoes?

Exactly. Your guess is accurate.

A picture that I wish I would have taken would have been John and my pockets, which were overflowing with electronics after each kid ran up and asked us to hold a cell phone and iPod so they wouldn't get wet.

I commented to John that there was something completely timeless about this scene. This same photo could have been taken 30 years ago of me and my brother and sister, absorbed in the feel of the sand between our toes and waiting for the next wave to wash across our legs. 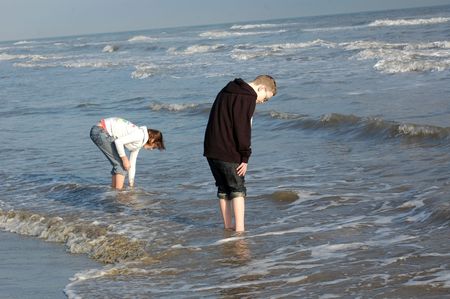