Summer of Pop-ups! Hitting the road.

Well it was fun to teach these two new card classes at VIP & Scrapbook Gallery, in Rochester MN, last Sunday. We had a great time and everyone was able to complete their cards in class. Thanks, Trisha, for a great time! 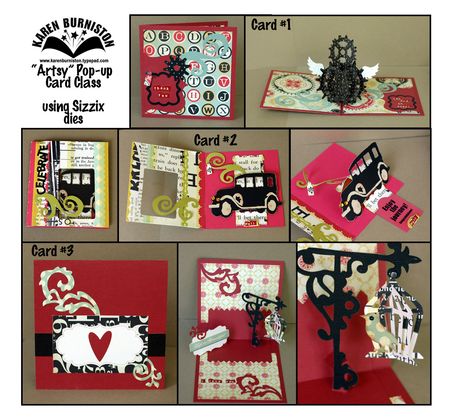 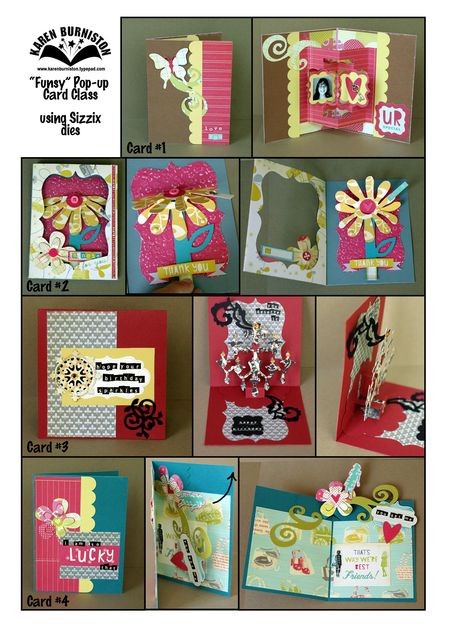 The Funsy class (pictured above, and yes, "funsy" is a word) (OK, yes, I made it up) features four pop-up cards in a more whimsical style. Clear envelopes are also provided for these cards and the themes can be adjusted based on which cut outs/stickers you choose.

The dies in both classes are primarily from my new Party Essentials dies, that are available in stores now.

The papers in both kits are from Cosmo Cricket (UpCycle and Circa 1934). The cardstock is all Core'dinations.

Here are the stores where I will be teaching these two card classes this summer. Check their websites for times and costs:

For Keeps Sake will have two additional classes as well. (Still designing them, but will post photos soon!)

So how about it? Want to come have some fun and try out the Sizzix pop-up dies? Join me for the Summer of Pop-ups!

Here's what I CAN say about Creative Escape . . . COME!

I am just home from an adventurous week of teaching and feel inspired and rejuvenated. It started with the Preview Event for Creative Escape and I can sum it up by saying: WOW!

First, the owners and staff of Bazzill Basics Paper are wonderful! They took such good care of us - I have never felt so pampered! Every little detail was taken care of - I had no questions about the schedule, my travel arrangements, where I was staying or how I was getting there - it was all arranged and communicated. Thank you to everyone at Bazzill, and especially to Lisa, Carol, Frani and Mona.

I've taught at a lot of events over the last ten years and I can say that the organization of Creative Escape is something that I've never seen before. It's as if they've anticipated every detail that could potentially cause frustration for a teacher, volunteer or student and . . . FIXED IT! The whole concept of the Preview Event is brilliant - all of the teachers were flown out to Arizona and had the opportunity to teach our projects to the volunteers and each other. It was a chance for us to test our projects, iron out the kinks, soak up tips and tricks from the wealth of creativity and talent that had converged in the room, and (here's the best part) TAKE THE OTHER CLASSES!

That's right - I got a chance to take all the other teacher's classes! Want to know what we're making?

I am contractually obligated to keep a close lid on what I learned at CE Preview Event, but Heidi Swapp said I can hint, so here I go:

Ali Edwards - I cried. In a good way. Ali is so inspiring that the project (which is phenomenal) was just the icing on the lecture cake. The love that she feels for her family and the passion she has for documenting and preserving it are overwhelmingly inspiring and upliftingly contagious. Ali went first, on Thursday night, and her Powerpoint (Keynote) was so well done that the rest of us were in our hotel rooms that night sprucing ours up! It was funny to see each teacher on Friday say "After Ali's class I went back and added . . . " The event started with a bang!

Janet Hopkins - It was Janet's birthday, (Happy B'day, J!) but we were the ones who got the gift. Janet's project was breathtaking. (And completely different than Ali's) It was also a blast to create. There is a substantial component to Janet's project (must only hint) that was created JUST FOR THIS EVENT! Yep - a product was manufactured for Janet's class and if you don't come to Creative Escape in August then you're going to miss out on being the first person to use this exclusive item! It was all the extra touches that put me over the edge. You know what I mean? You're looking at it saying "this is the most gorgeous thing I've ever made" and then Janet would say "and now we're going to add this thing-gummy over here" and then you'd say "even better!" and so it went.

Karen Burniston - I can probably give you the biggest hint about my project - there's a pop-up involved! (In other news - the sky is blue!) My project (which is completely different than Ali's and Janet's) had the most hiccups. I am probably the teacher who MOST benefited from the preview event, because I learned that a part of my project that I thought would be easy to explain . . . wasn't. Luckily, though, the room was filled with experienced teachers and crafters, so by brainstorming with them, I know exactly how I can explain that portion of the project so that every single student will be successful. Thank you CE Preview attendees - it's because of all of you that my class is going to be legend . . . wait for it . . . dary!

Amy Totty - Where to even begin with Amy. First of all, she's funny. I love anyone who can make me laugh, and to hear Amy tell stories about her kids - well, prepare to feel like you've done a thousand sit-ups because your gut is going to get a workout! And then. Then. Then . . . Amy showed her project. And I gasped. Amy's project (which is completely different than Ali's, and Janet's, and mine) was amazing. Without saying too much, let me just hint that Amy will make you love Glue Sticks. What Amy taught us how to create was one of those "I never could have thought of this and it looks like it took hours to create but really it was surprisingly easy and very relaxing" type of techniques. I would say more, but I can't. You'll have to come to Creative Escape and see for yourself!

Vicki Boutin - Vicki, Vicki, Crazy, Funny, Canadian Vicki. First of all, I sat with Vicki. We both discovered that we are pretty lousy students. In fact, if it wasn't for our darling Cat Jones, who was sitting next to us and keeping us on track, we would have failed epically in classes that were being taught very professionally by the best in the business. Believe me, I have a whole new appreciation for the rigors of being a student! Vicki is one of those people who just oozes techniques. Her project (which is completely different than Ali's, Janet's, mine, and Amy's) has so many different techniques that your head might explode. But in good news, Vicki would find a way to blend and techniquefy (it's a word) the chunks of your head into something fabulous. I visited three awesome scrapbook stores during this trip and because of Vicki's class, I bought technique-based items that I didn't know I needed prior to taking her class. In the other classes, Vicki would always go an extra step to make her projects "her own" and then I would look over wistfully and wish that I had an ounce of her talent. Plus, she's a hoot!

Heidi Lynn Schreiber - Heidi Lynn had me at "bad boy". Yes, that sounds odd, but I discovered that Heidi Lynn and I both personify our kit pieces and they are often (for some reason) masculine! As in "Here's what you do with this bad boy. You add glue to the center and . . ." OR "OK, has everyone found their red piece? Let's take him and scrunch him up!" I absolutely LOVED Heidi Lynn's teaching style. There was singing! Come on! That's cool! Plus, her project (which was completely different than Ali's, or Janet's, or mine, or Amy's, or Vicki's) was GORGEOUS!!! Go take a look at her website and you'll get a taste of her penchant for layers. Another one of those projects where it would have been pretty at point "A", but by taking it to point "B", it became a masterpiece! Heidi Lynn also embraced the theme of Creative Escape and was able to translate what that meant to her in a way that was very, very inspiring.

Jenaye & Kelli Collins - I did not know. I absolutely did not know, prior to this event, how much I could incorporate fabric into my projects, and the types of things I can create with it. First Amy's project from Friday and then, on Saturday, came the Collins Duo and thusly were I converted! (It's a phrase) Once again, the projects were fabulous, and both Kelli and Jenaye were able to teach them in a way that everyone was successful, even someone like me, who mainly uses needles as paper piercers. (Because Lucy chews up my real paper piercers - don't get me started!) Jenaye and Kelli's projects (which were completely different than Ali's, Janet's, mine, Amy's, Vicki's, and Heidi Lynn's) look like you purchased them in a high end boutique and instead . . . you MADE THEM YOURSELF!!

Suffice to say that "inspired" doesn't even cover it! Honestly, I cannot think of anyone who would not love each and every project at this event. It was an absolute honor to be in the company of such highly talented industry professionals. Plus, the Volunteers are PHENOMENAL! I feel so much more confident knowing that Sharon Margiotta and Shye Petersen will be helping me in every class. Sharon was really talking me down from a ledge about that tricky part of my project. She said "I will help you . . . but only if you do not change a single solitary thing about this project." What a confidence boost! Sharon, I just met you, but I'll love you forever! And Shye is a legend. In addition to being a crafter extraordinaire, her baked goods are phenomenal! When she passed around her cookies I was torn between devouring and savoring. Yes, they were THAT good! Like, the best cookie I've ever had. Just sayin'!

One more bit of gushing.

Heidi Swapp. Dude. In the scrapbooking world, Heidi Swapp is Ashton Kutcher . . . she's awesome! Sometimes being in the right place (CHA) at the right time (Sizzix booth) leads to a once-in-a-lifetime opportunity to be a part of something special. This event, thanks in large part to Heidi's wealth of knowledge and talents, is going to be something special. Heidi is the keynote speaker plus she's teaching a bonus project on Thursday, so you get the best of both worlds- inspiration in the physical (a project) and inspiration in philosophy (bring your tissues).

Here's a photo of the Teacher Dinner. Did I mention that we were pampered?!

I know it's not an Oscar acceptance speech, but it feels like one. How many ways can I say Thank you for being part of this awesome event? I'm still pinching myself!

How about winning a couple of tickets? Help Stephen and you will feel like a winner. You might also be an ACTUAL winner of two free tickets to Creative Escape. 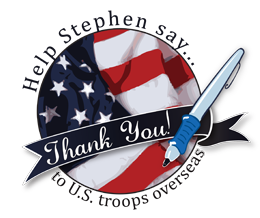 More tomorrow about the rest of my adventures!

I have been very busy getting ready for some upcoming teaching trips.

The first is at VIP Scrapbook, in Rochester, MN on Sunday, May 22nd. I'll be teaching two card classes - one more 'artsy' (pop-up dies with Tim Holtz dies) and one more 'funsy' (whimsical designs)

You can get the times, costs and other information on VIP's website here: VIP Scrapbook

So come on down, Minnesotans. Will it be fun? Yah, sure, you betcha!

The card I'm showing in the video is this one: And then here is the video tutorial for assembling the O Christmas Tree pop-up die: