On Texas school and critters and things of this nature

The first week of school in Texas can be summed up with a series of numbers:

1 near-heat stroke for me and the dog

2 days where Karl got lost (resulting in #1)

3 trips up to the school for various reasons (don't ask!)

5 days of getting up early

7 hours of a GREAT SCHOOL DAY on Friday resulting in two smiling kids finally saying "I think we got this, Mom."

Suffering through the first 6 was well worth the Friday prize.

On a completely different subject, you like free stuff! The Tent template (scroll down) was downloaded over 3,000 times! Wow! I'm flattered.

On a completely different subject, there are lots of creepy crawlies in Texas and this shall comprise the rest of today's blog post.

It started the day we closed on the house. I had flown down for the closing by myself, so I was sitting in an empty house catching up on e-mails when I noticed a trail of the smallest ants I'd ever seen.

The ants were a nuisance, but we lived with them for a couple of weeks, using ant traps and sprays, simply because we had so much going on.

At least, I reassured myself, it wasn't roaches!

One evening John went to let the dog out and I heard him exclaim "Whoa! That's a big roach outside!"

The next morning he mentioned, before leaving for work, that maybe we should get a bug service started sooner than later. "Judging by the size of that roach outside last night, we really don't want those things in our house!" Well duh.

Later that same morning I walked into my bathroom, Karl trailing behind me telling me something scintillating about computers, and stopped short.

ME: There's a big dead roach on the floor - look!

(How cute that my little Colorado munchkins had never seen a roach!)

ME: Yes, and they're gross. Get me the dustpan, please.

As I was scooping up the roach, I noticed several spots of water on the floor surrounding it. The roach wasn't squished, so I had no idea why it would be wet on the floor.

KARL: (casually) Oh, I saw one of those roaches in the pantry this morning.

KARL: I opened the pantry door and it ran out into the kitchen.

ME: Did you do anything? Chase it? Squish it?

I called John at the office.

ME: I have bad news and slightly better bad news.

ME: I found a big dead roach on the bathroom floor and Karl said he saw a big LIVE roach in the kitchen. However, my years of reading Agatha Christie novels have helped me solve the mystery of the roach puddle. (triumphantly) Lucy picked up the live roach, killed him and dropped him, along with slobber spots, in the bathroom! So it's only ONE roach!

(I have a history of being delusional when it comes to pests. For more on this subject, read this blog post, from a couple of years ago)

JOHN: Yeah . . . I might have let that roach in. Remember when I said there was a big roach outside?

JOHN: Well he WAS outside, but when I opened the door he immediately ran inside, scurried across the floor and straight under the couch.

ME: Wasn't I SITTING ON THE COUCH at the time?

JOHN: Yes. That's why I didn't say anything. You're welcome!

I arranged for a pest service that very day!

When the bug guy came for the first time I showed him the ants.

BUG GUY: Those are "odiferous ants". They call them that because if you squish enough of them, they smell.

Really? Odiferous? Why not "Stink Ants" or "Smelly Ants"? And then I started singing "Smelly Ants. Smelly Ants. What are they feeding you?" and completely missed whatever else Bug Guy was saying.

For two mornings after Bug Guy came I would step outside to get the paper and notice 3 or 4 large roaches dead on the driveway slab under the carport. I thought:

ME: Wow! Look at that - the spray that the Bug Guy used outside is really powerful! These roaches were attempting to GET IN our house and hit that barrier of poison and then fell over dead!

And then, after thinking about it for a while:

The ants took two treatments, but we haven't had further roach incidents since the Bug Guy came.

But I suppose our Spidey Senses were tingling in overdrive, because a few days later John announced:

JOHN: I found an odd-sized dropping in the cabinet. It's either a small mouse or a large bug.

ME: Ewwww! What IS this place?! (insert a severe pity party laced with hand wringing, profanity and homesickness) (Calming down and opening the cabinets) Which cabinet?

John hands me a small ziploc bag in which he has sealed the evidence, apparently so I can show it to the Bug Guy.

ME: (examining it) It's a sprinkle.

ME: Yes, a sprinkle for ice cream. (and then, after a pause) Grape.

I said "Grape" because it was the perfect reference to a long-ago college trip of John and two friends to Kearney's family beach house. The story goes that Brian came up to John holding a small round object that he'd found on the beach.

BRIAN: John, check this out. I found this thing on the beach. It's really strange. I've never seen anything like it.

The two of them had their heads bent over the object trying to figure out what it was when Kearney approached.

BRIAN: Kearney, check this out. We're not sure what it is.

JOHN: We think it might be a pod, or something.

KEARNEY: (glances at it in Brian's hand) It's a gumball.

And then, while Brian and John were still processing what he'd said, Kearney picked up the object, popped it in his mouth, chewed for a second and then announced:

That actually happened. Kearney is now a successful surgeon, by the way. I guess he always had faith in the immune system!

(RKQOTD: Me: Karl, you have a beautiful mind. That brain of yours is going to take you places. Karl: Like Paris? Me: laughing Sure. Like Paris.)

My good friend Lance Anderson is a guest on Good Things Utah today and will be featuring a Camping project I designed about a year and a half ago. 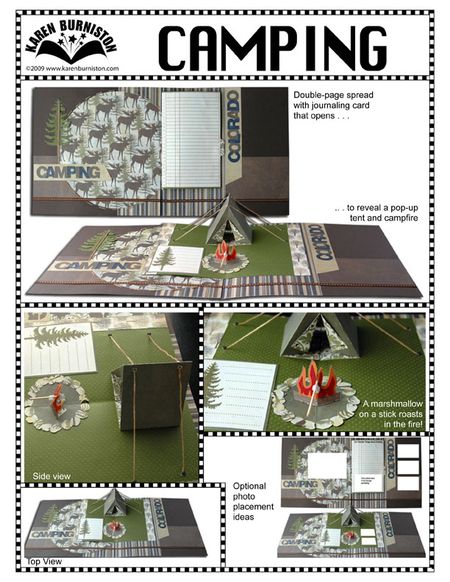 In other great news, The Paper Loft is still selling the Back Country paper collection, so if you adore my color choices, you'll be able to make it exactly as pictured. Here is the link to their online store: http://www.qbaroo.com/thepaperloft/main.cfm?categoryoid=1

However, the beauty of Home Construction projects is that they can be made quite easily out of any papers, so feel free to substitute.

Here are the files you'll need to make your own Camping layout:

As always, I'd love to see what you create!

EDITED TO ADD: Exwoods mentioned being unable to download the files using the links above. They're working fine for me, but if you have any trouble, they can also be downloaded here: karenburniston.com/camping