Just wanted to share a sneak peek of two brand new classes that I will be teaching in England, Belgium and the Netherlands in a couple of weeks.

The Christmas class is a chipboard mini-album where we alter the pages to create a V-shaped notch to allow the interactive feature, a foldover 3D ornament on the final page, to be displayed even while the album is closed. With the built-in attached easel, the album can be stood up on a table and flipped through without closing the ornament.

I was inspired for the ornament by a card I saw in a book about geometric origami. It was interesting to flip through the book, because there were a lot of techniques in it that I had figured out on my own, but I must admit that the foldover idea was new to me. As with all my classes, however, I start from scratch on my templates, meaning I take no measurements or deconstruct anything that inspires me. In this case, the general idea is the same as the origami card, but the thickness of the chipboard added a whole other dimension (literally!) to the design, and the resulting template is my own interpretation of how to get a similar effect as the one I saw. 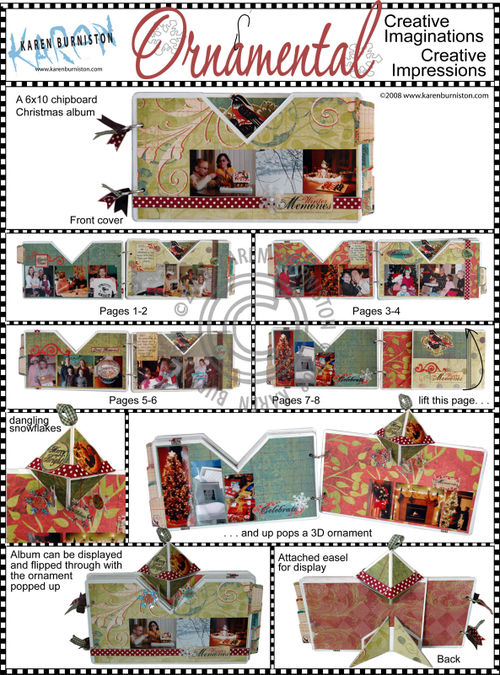 I will be teaching Ornamental at these stores:

Contact the stores for times and pricing.
The second class is called King of the Castle, but could just as easily be called "Queen for a Day", since the colors and theme is gender-neutral. I picture this project being used for anything from kids, to birthday, to girlfriends, to travel. (Especially if you have some castle pictures, no?) Make the project again at home using pink and purple and it's a Disney princess album!
We're starting from a pennant-shaped chipboard album and adapting it into a crown shape, complete with fun spinning closure. Open each of the three sections to reveal more areas for photos and journaling plus three little pop-up castles. Fun! 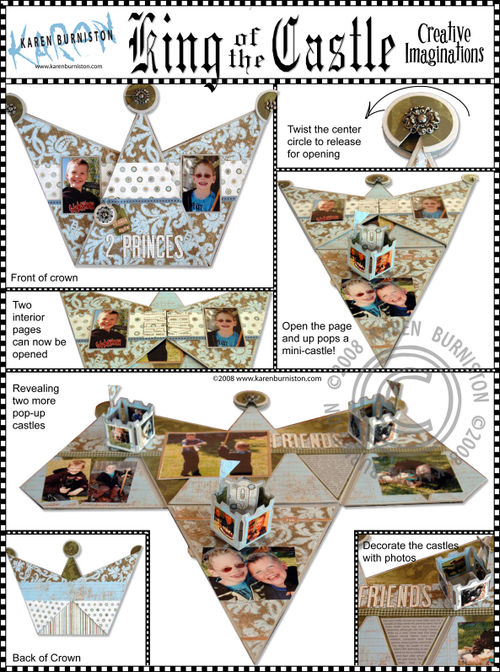 For these private classes, I'll be traveling and teaching with Cheryl Mezzetti. You can view her projects on her blog: Alter This
Hope to see some of you there!
RKQOTD (Karl: Mom, I gave Lucy her Kong with some treats in it. I broke them into medium-sized pieces so it wouldn't hurt her self-esteem.)

Dollar Scrapbooking needs help in our booth next week at the CK Kansas City Convention.

Pay is $10 an hour in cash or $20 worth of product per hour. You can take partial pay (some cash, some product) as you see fit.

Admission to the show on the day(s) you're working is included.

Lunch is provided for all-day workers. Parking is reimbursed.

The shifts I have available are:

You do not need to be a scrapbooker to work - if you've got a responsible teenager looking for some spending money - this is a great opportunity.

The single-session class is an interactive layout class and I will warn you now - there will be homework! We will concentrate on constructing the house of cards (the hard part) in class and the rest (the easy parts) will have to be done as homework. The instructions are good, though. 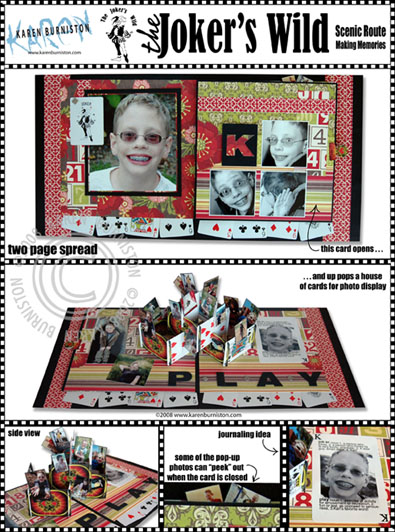 The double-session class is an interactive 6"x12" Christmas album that combines acrylic pages with chipboard pages and features two pop-up Christmas trees. The ribbons I used on the sample were some generic ones from my stash, but the class kit will include beautiful ribbons and trims from Creative Impressions. I'm looking at them now and drooling - velvets, rickrack, braided, printed, silk, organdy - yummy! 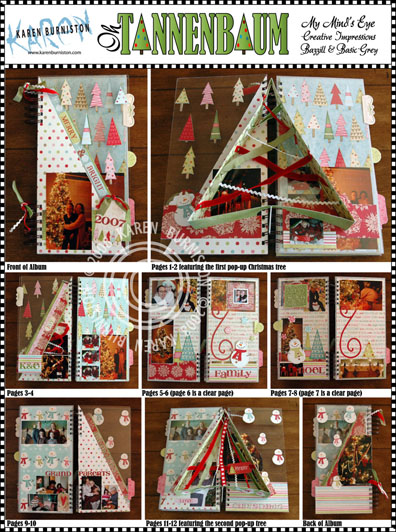 As usual, I can't seem to keep up with all my obligations - like updating my blog and website. It's a bit of a killer fall, with trips galore, and I've been super busy designing classes for the Europe trip. More on those in the next post, but if anyone's interested in a new Home Construction project, here ya go! 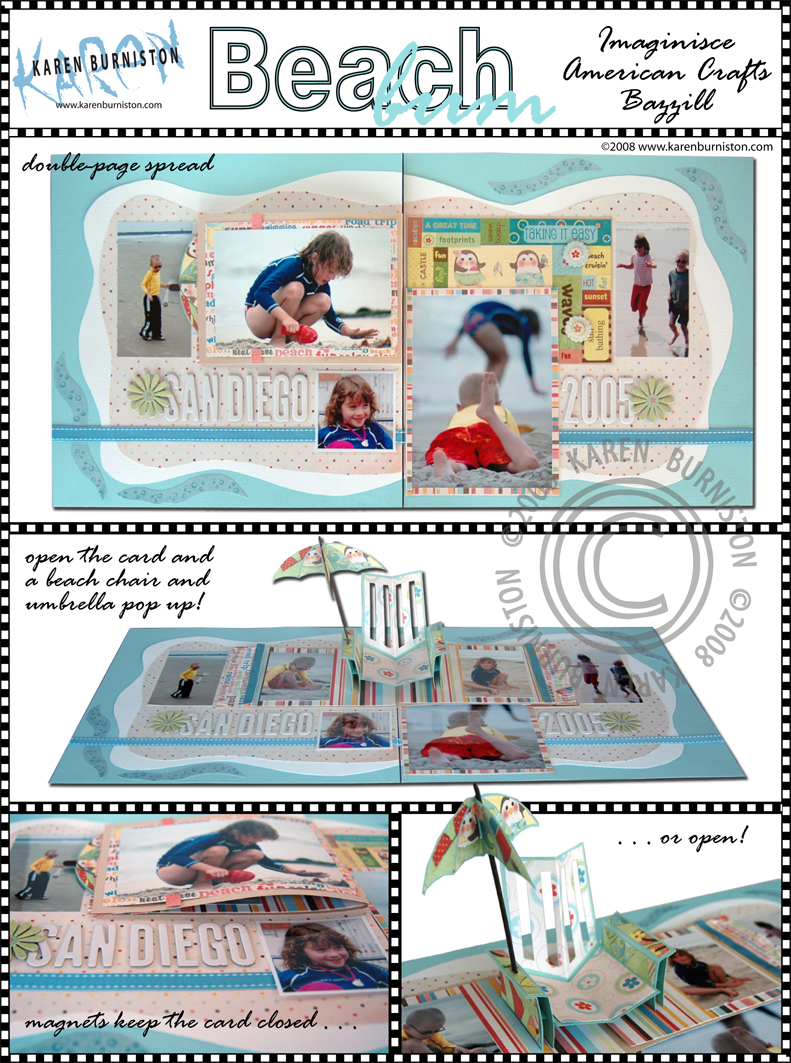 When Karl saw this he said "Cool palm tree, Mom!" so feel free to decorate the umbrella as a tree if that's how it strikes you. Versatility . . . so good at the versatility!

RKQOTD (Me: Karl, I love that trick you learned from Miss Leiting for "nines" multiplication using your fingers - I'd never seen that before, but it's really cool! Karl: Yeah, it works well. (pauses) Well actually . . . it only works if you have 10 fingers. If you're Captain Hook, you're out of luck!)

Edited to Add the Nines trick:

So this is a pretty neat trick that Karl's teacher showed him. You hold your hands out in front of you and, counting from the left, you fold down the finger of the number you're multiplying by 9. (This only works on facts from 9x1 to 9x10). The remaining fingers tell you the answer. The number of fingers to the left of the folded finger is the tens digit and the number of fingers to the right of the folded finger is the ones digit. Here's a visual for 9x4: 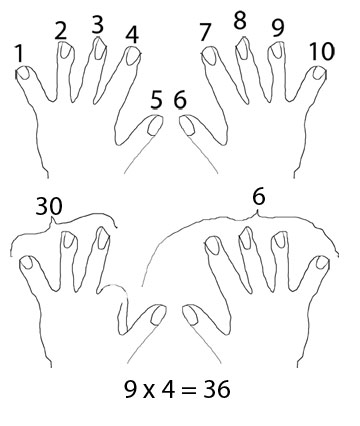 Maybe everyone else already knows this trick, but I'd never seen it before and I think it's nifty!