The thing about crowded airports is that it's very difficult to have a private phone conversation and even harder to find an electrical outlet.

Last Tuesday I cleared customs and immigration at Washington Dulles and had two hours to kill until my flight home. I ordered a steak quesadilla from Baja Taco because, with no offense to my dear friends in the Netherlands, good Mexican food is hard to come by over there. Wandering around with my cheese-laden backpack (Note to Sandy: cheese is heavy, yo! How about a tee-shirt or a keychain next time? Fridge magnet?) and my cheese-laden quesadilla (see what I did there?) I was frustrated by the shortage of electrical outlets. My phone was dead and I wanted to call home.

Finally I settled in a gate area that was surprisingly private - you ducked behind a wall and found a whole other bank of seats - all of them empty save the one dude smarter and quicker than me, who had snagged the one electrical outlet and was flaunting his charging phone and laptop. I thought maybe when he saw me searching in vain for more outlets he'd have pity and offer me one of the plugs, but no, not so much. I settled in across the way to glare at him and eat my lunch.

Eventually he had to catch a plane or something so I pounced, snagging both the plugs for my phone and iPod and settling in happily with decent privacy, a full belly, and the promise of talking to my family by phone immediately and then seeing them in person in just a few short hours.

John answered on the first ring and we chatted happily about our upcoming trip to the mountains. They were picking me up from the airport and we were heading straight to Breckenridge to spend a few days with Kristi and her family. Suddenly John's voice dropped to a very serious tone:

JOHN: I have to tell you something.

ME: (alarmed) My goodness, what is it?! You sound so serious.

Now some people (*cough*Becky*cough*) have suggested that there's an eerie similarity to John's grown-out curly 'do with my favorite American Idol contestant, Elliott Yamin. Here I am with Elliott when he played a concert in Denver last June: 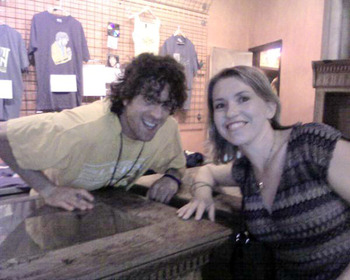 And here is John's gorgeous head of curls last month: 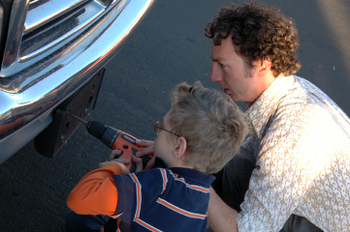 And I liked it a lot. Not so much with his buddies at work, though. He suffered quite a bit of teasing over his hair. He also started using more hair care products than me. His morning routine took longer as he fussed with his hair. I suppose the eventual snipping was inevitable, but I was still distraught.

ME: You CUT YOUR HAIR?!! Oh no! I was looking forward to running my fingers through it!

ME: I can't believe you caved to PEER PRESSURE! That you care more about the opinions of your friends than your very own WIFE!

JOHN: What are you talking about?

ME: Oh we both know. Your friends teased you about your luxurious locks and were jealous of your hair care regime - you just couldn't take the heat of looking that fabulous. Oh the humanity!

JOHN: They did it.

ME: They did it? What do you mean? THEY CUT YOUR HAIR?! What did they do? Hold you down?

ME: OH! They paid you to cut your hair? I'm actually impressed. That's some good negotiating. Did you hold out for $60?

JOHN: No . . . but I should have. I didn't exactly understand the parameters.

JOHN: Yeah. The parameters. I thought there might be, you know, a clipper guard involved.

And here's where I lament the lack of privacy in an airport again. Because I really shrieked that "ARE YOU BALD?!" part. And of course the one person sitting in my private little alcove was . . . you guessed it . .. bald. Balding, really. Which is worse. Because total baldness signifies acceptance - either all the hair has fallen out or he's gone the way of the razor. Bald-ING can still involve some self-consciousness and hyper-sensitivity.

And then again later when I got up to leave.

But I'm getting ahead of myself. (Pun intended) I was still reeling and on the phone:

ME: Bald? What could you POSSIBLY be thinking?

JOHN: Well in good news I have a really nice head!

ME: Oh good. No lumps or protrusions?

ME: Let me speak to Emma.

ME: Hi baby! I'm back in the country again and I'll be seeing you in just a few hours, but what I really want to know is . . . what do you think of Daddy's hair?

ME: Hi Boo! What do you think of Dad's hair?

KARL: Well at first it was a little shocking but it's coming in nicely!

After a few more words with John . . . words where I reminded him that men pushing 40 are a little too old for fraternity-ish pranks where they shave their heads for $50 and that he'd better hope that a week would grow oodles of hair before heading back to his, you know, PROFESSIONAL JOB and all . . . I hung up and called Cheryl.

We laughed like banshees, further sealing my place of hate with Mr. Bald-ING, and then Cheryl asked if I thought John might be joking.

I had a glimmer of hope, but there was no way he would have been able to make Emma play along, (Karl, definitely. Emma, no way.) so my hopes were immediately dashed. The boy was bald. It had to be.

I'd post a picture, but I just discovered that he had a hat on the entire trip to the mountains.

And, in truth, his hair really IS growing in nicely. He went to the office for the first time today since "the incident", and I feel confident that although he'll receive many questions, they won't be about chemotherapy. Maybe about enlistment or lice, but not cancer. So there's that.

My trip to Europe was fabulous, as usual. I taught a lot! A whole lotta lot! 16 classes in 9 days. I'm pooped. The students were incredible, as usual, and the store owners and everyone at Scrapbookmate were all kinds of wonderful. Monique, Tom, Miranda, Femka, Sandrine and Patricia - thank you SO MUCH for the help in the classes. I couldn't have done it without you. And to Heidi, Ben, Deanna and the girls - your hospitality is so appreciated. Thank you!

I've been invited back for Scrap-a-Ganza in June and will also be teaching in the U.K.  I'll post details and class designs as I get them done.

But for now . . . I have some Christmas decorations to find! And some hair care products to dispose of.

RKQOTD (Emma: Karl, if you had children, what kind would you want? Karl: Children who are interested in science. Emma: I meant boys or girls.)