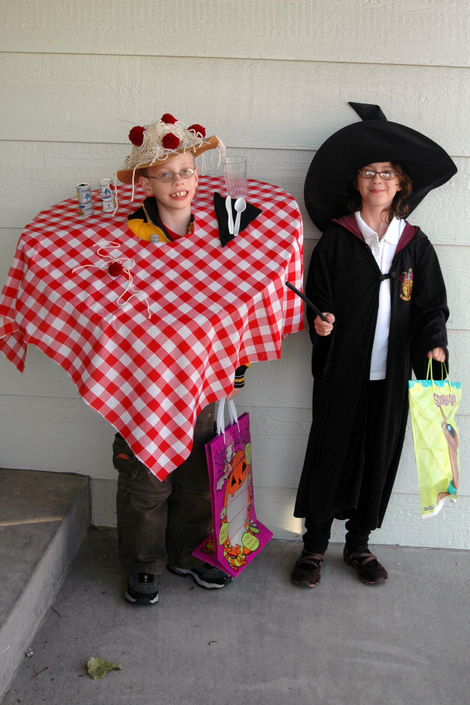 Emma is Hermione, from Harry Potter. Karl is self-explanatory!

Another class - this one for doe@ding in Rotterdam on November 13th. The other class is Starstruck

The Winter class is a chipboard album, modified to have pull-out pages, with a fun binding and a pop-up snowflake chain in the center of each spread. I decorated mine with photos from the Blizzard of 2003, but the photos do not have to be snow-related. Each kit comes with a complete sheet of alphabet punch-outs and you can make whatever titles and captions you like.

If you are a student needing info, here is the link: Winter Mini Album

EMMA: Listen to this joke from the joke book that came with my kids meal: Did you hear about the delivery van loaded with thesauruses that crashed into a taxi?

KARL: Let me tell you what that means. "The Saurus" is a suffix that is used to describe a type of dinosaur. So the joke is that there were a bunch of dinosaurs in the van and they were injured in the crash.

EMMA: (looking at the joke book and thinking for a second) Correction. "Thesaurus" is a type of dictionary that tells you different words for things. I think it's trying to say a bunch of words that mean the same thing.

ME: My vote is with Emma.

Isn't it impressive the way I can make myself disappear? Magic, baybee!

Speaking of magic, the kids and I were in the grocery store the other day getting just a few items. We decided to use the Self-CheckOut which is a particular favorite of the kids.

KARL: Mom, they changed the system.

ME: Oh yeah, you're right. It does look different. Well, I'm sure we can figure it out. Just start with the easy stuff and then we'll do the produce last since we have to look up the codes.

And so we beeped and bagged our way through the waffles, soup, yogurt and crackers until all we had left were the produce items.

ME: Karl, hit the "Item doesn't have barcode" button.

KARL: OK. Now it says to put the item on the scale.

We put our bag of cucumbers on the scale and waited for the machine to ask us to input the code. The codes were all pasted to the front of the machine, so I took the opportunity to find the code while we were waiting.

KARL: The computer is figuring out that it's cucumbers.

ME: No. The computer can't tell that. It's weighing them, but then we'll have to tell it the code for cucum-

Karl turned and grinned triumphantly at me.

I stood gape-faced for a second trying to process what just happened. There are 6 self-check-out stations at King Soopers and an employee stands at a computer in the center and offers assistance when customers have trouble. It took me just a second to realize that the employee must have input the code. I glanced at Karl with a look that clearly said "Oh my dear child. Let me tell you how that happened"

ME: Oh my dear child. Let me tell you how that happened. There's a King Soopers employee putting in the codes at that comput-

I didn't finish my sentence because as I was explaining in tones most superior I turned to point at the employee, you know, for added emphasis.

THERE WAS NOBODY THERE!!!

Karl grinned triumphantly at me again.

Karl went through the "Item doesn't have barcode/put it on the scale" process with the apples and then stared expectantly at the screen. I was still looking around in puzzlement.

KARL: Mom, (he had adopted my superior tone) the computer can tell what we're putting on the scale. It can tell from the weight.

ME: But you could have the same weight of apples as cucumbers. Obviously there must be an elaborate camera system in there, but why would they go to all that trouble and expense? They have the codes right here on the machine.

We stood hunched over staring into the scanner section of the computer. I glanced behind me to verify that there still wasn't an employee at the computer. There wasn't.

KARL: Time for the tomatoes!

I had lost my ability to speak. It truly seemed like magic that the scanner knew our produce items. Naturally, the computer was not stumped by tomatoes.

ME: HOW DOES IT KNOW THOSE ARE TOMATOES?!

I whipped around and saw an employee standing nearby, near enough to hear my outburst. I repeated my question to her.

ME: Excuse me, how does this computer know that we're buying tomatoes?

And that's when it happened. The employee grinned at me. She showed me what was hidden behind her back.

A handheld device with a bunch of buttons on it.

It obviously had wireless code-entering capabilities. She showed it to me with an expression of "Don't spoil the magic for the kids" but apparently didn't realize that I had been completely taken in by the magic as well.

I had that mixture of thoughts that you have when you've been duped. The: "wow I'm so relieved I'm not crazy/what a mean trick/ha ha ha how funny" mixture.

I sure enough spoiled it for the kids.

ME: Gasp! Karl - look at what she has! It's a handheld computer. She's putting in the codes for us! I knew it had to be something like that! I knew it!

Karl just looked disappointed. So did I, if I'm being honest. We rather liked the magic scanner.

Jim would have never told Dwight that the computer wasn't alive.

OK, onto other subjects. Remember how I said I wasn't going to post again until 3 more classes were done? I've only finished two and a half, but I'm posting anyway.

Because I lie. I lie.

These are the classes for two stores in the Netherlands: Simpel Scrappen on Monday, November 12th, and Paper and Pictures on Wednesday, November 14th. I've put the website links under each of them so you can go read the descriptions, picture sizes and what to bring to class. I love how these classes turned out and I'm so excited to teach them! So Dutch scrappers - please sign up! 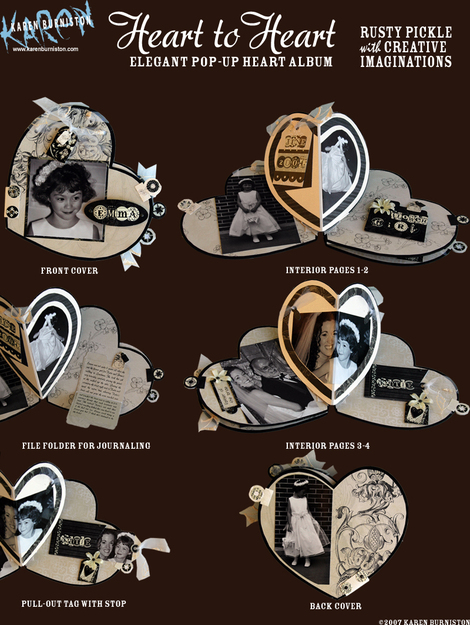 RKQOTD (Karl: Mom, you know what's wrong with the F.B.I.? Me: Uh. No. Karl: Well most people think it stands for Federal Biology Institute. Or anything else that starts with an F, B and I.)

So it has been most delicately pointed out that more than 10 days have passed since my last blog post. My apologies! I was out of town at the Simply Southern scrapbooking convention for 5 of the days, and then just all sorts of work and life issues have been keeping me buried.

Speaking of Simply Southern, I had a lovely time! Linda, Jessica, Michelle and Cheryl were invaluable at the booth. I could just gush on and on and on, but there's really nothing funny or embarrassing about it, so let me just skip to the plane ride home.

Huntsville Alabama is not the largest airport I've ever encountered. (Weird, right?) There is exactly one flight a day between Huntsville and Denver and the plane is a wee little Canadair jet with 50 seats and one bathroom. There is a little indicator light at the front of the plane to tell you when the bathroom is unoccupied and, seeing that the light was not on, I decided to take advantage of it.

Being a very important Premier flyer, (no, no, stop the applause, you're embarrassing me!) I was seated in row 3, meaning that darn near the entire plane full of people saw me go past them on my way to the bathroom. This is an important fact, so remember it.

The bathroom is stupidly situated right across from the last row of seats. An elderly gentleman was the occupant of that undesirable seat next to the bathroom and I gave him a sympathetic nod as I entered the tiny cubicle.

Now everyone knows how the lock thing works, right? You slide it to the lock position, the lights go on, the indicator in the front of the plane goes on, and although a mere inch of door separates you from the elderly gentleman with the unfortunate seat assignment, at least you have some semblance of privacy.

Unless the door slide doesn't work.

I slid it again (this time with more force) . . . and it stopped halfway. No lights came on.

I slid it . . . well, you get the picture. I was starting to dance around. They serve Diet Coke on United flights. Need I say more?

So I decided to just risk it. I didn't need much time, most everyone had seen me walk by, and even if someone came back there, the elderly gentleman would tell them it was occupied, right?

A lady yanked that door open on me and the elderly gentleman got an eyeful. I screamed. She screamed. I slammed that door shut and put every ounce of force I had on the door slide. It finally unstuck, but the damage was done.

It was hard to leave that tiny bathroom in the back of the wee Canadair jet. I'd been wee-ing. They'd been see-ing. I had to walk the entire length of the plane to get back to my Premier seat.

The lady was standing in the aisle with her back to me. I think she was too embarrassed to face me. As I passed I hissed "The door lock sticks!" and she just nodded and gulped.

These are the types of things that seem to happen to only me.

WHY didn't the elderly gent . . .oh who am I kidding? He was annoyed to have that seat and the drama of bathroom-gate was probably the highlight of his flight. He's probably blogging about it right now!

As to the other stuff - life drama is too life-y, so I won't bore you. Work drama is that I've got a heap of classes to get designed and I'm not the speediest of designers. With the interactive parts you have to draft templates and test them and see if they work and re-test them, etc., etc. So I am going on record with saying there will be no more posts until 3 more classes are designed. That's a good week, at least.

In the meantime, here's the other class for Scrap-a-Ganza in November. It's called You Who and I'll try to get it on my website later today. We only have an hour for this class, so I tried not to make it too, too complicated, but there will still be a little bit of homework. Just easy stuff though. All the interactive and stamping stuff will happen in class. 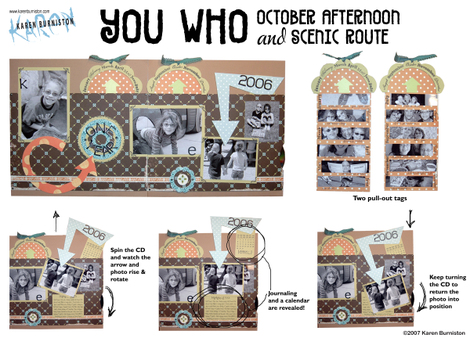 I've been wanting to design a class with the spin wheel for some time. I love the way this thing works. You just spin the CD and the arrow pulls up the photo, revealing the journaling and a calendar. Keep spinning and the photo rotates back into position. I'll show you how to alter your page protectors so the elements work in an album. The papers and stamps are October Afternoon. The other embellishments are Scenic Route. Cardstock is Bazzill.

RKQOTD (Me: How's your shake, Karl? You know - when I was pregnant with you and your sister I used to love getting vanilla shakes from a drive-thru called Rally's. Karl: Here's the thing, Mom. Making unhealthy choices when you're pregnant can sometimes affect the baby.)