John: I'm going to Albequerque on Tuesday and I'll be back on Wednesday.

Now normally I would not pass up such a perfect set-up. Normally I would have adopted my best Bugs Bunny voice and told him to make sure he made a left turn.

Normally, that is. What I actually said was:

John: (startled) Yeah, why? Is there something going on?

Karen: (choking back tears) Tuesday is the So You Think You Can Dance concert. Oh man! I can't believe it. There's no way I can get a babysitter on a school night when we'll be out that late. Whaaaaaaaa!

John suggested that I take the kids to my parents' house (an hour away) and let them miss school the next day. Wasn't sure I could quite justify that one, though. In the end Desi, Ev's husband, said he'd watch them so we could go. And he suggested we leave early and go have dinner downtown! How cool is he? Desi, you're forgiven for being deployed and messing up our Ascent training regimen. Heh.

So Tuesday came, John left for Albequerque, the day somehow flew by, and I found myself with one short hour to get ready.

Me: OK, kids. We're leaving for Mr. Desi's in an hour. I've got to shower and get ready. I need privacy and no interruptions unless it's an emergency. Got that?

Me: (hastily grabbing towel) Yes, Karl? Is this an emergency?

Karl: Maybe. I can't find a pair of matching socks.

Me: That's not an emergency.

Me: (diving into the closet half-dressed) Yes, Karl? Is this an emergency?

Karl: Maybe. I wanted to make sure you had the secret code to my room. I calculated it by waah waaah waaah wah waaah waaaah push buttons wahh reverse numbers waaah waaah. Here's the code. I'll put this calculator outside my door and if you want to enter you'll have to enter the code.

Me: Got it. But that's not an emergency. Privacy please.

Me: (startled into smearing mascara all over my face) I'm not even going to ask if this is an emergency.

Karl: Don't you think I should bring my iPod charger and pillow since we're going to sleep at Mr. Desi's?

Somehow I managed to finish getting ready and we went to pick up dinner for Desi and the kids and then went to exchange them for Evelyn.

Me: Ev, you look so cute! That color is fabulous on you.

Ev: You think? I think I look like a mom. I need some cooler clothes.

Me: Nah. You look great.

Ev: I'm wearing a SWEATER SET, for gosh sake! What happened to me?

When we were walking into the convention center, though, we were right behind a lady with a baby, and I pointed out to Evelyn that her sweater set only announced "mom" whereas the lady in front of us was screaming it. (What with the BABY and all!) In fact, the age range for this concert seemed to span from 6 months to 87 years!

Our seats were FABULOUS! We were probably only about 20 feet from the stage. The only drawback was that the handicapped section was right behind our section, so if the crowd stood up for more than an ovation the people in wheelchairs would start screaming for folks to sit down. You can't blame them for wanting to see the show, but it was a little strange to be glued to your seat at a dancing concert.

And what a concert! We were allowed to take non-flash photography and Ev had her camera, so we took about 100 blurry pictures and 10 good ones! We also got some video of our favorites. (Dmitry for her, Ivan for me) Here's a sampling of the night:

They did all the favorites from the show and a few new ones. Some of the show dances were changed (Ivan instead of Travis krumping with Martha) and some were expanded to include all the dancers (SexyBack, Ryan & Allison's Broadway). I noticed that Jessica was in a couple of the group dances even though she wasn't top 10, but Evelyn read somewhere that she and Jamez are understudies. We never saw Jamez, though. The dancers looked and sounded exactly like they did on TV, which was somewhat surprising.

The krumping routine turned into a high-energy group hip-hop routine that ended with Tranji. (Benji and Travis doing the geeks-do-hip-hop number) Here they are afterward: 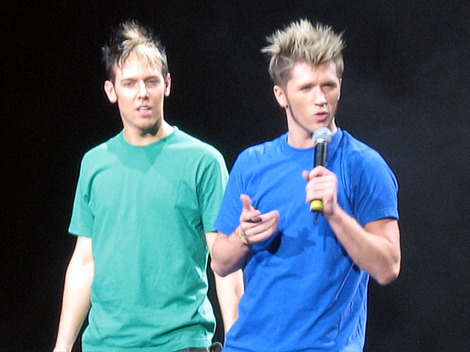 What are they saying, you ask? Well isn't it obvious? They're asking Ev and me to join them for the Ramalama Bang Bang routine, of course! 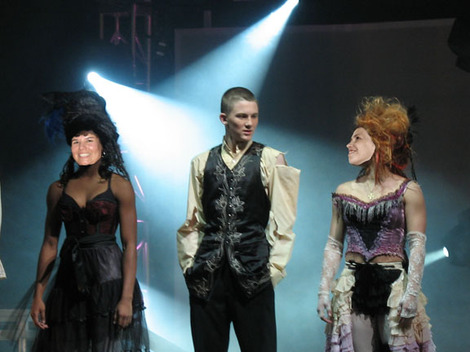 And notice the way Ivan is looking at me! No, that is NOT a "smell a fart" look! Easy mistake, but no. That is actually a zombie "come hither" look.

Ivan, can I call you Ashton?

Note: Karl was quite intrigued by my request for him to take a photo of me gazing adoringly toward my right. He wanted to know what I was looking at. Just wait, I told him, opening Photoshop . . .

And for your final viewing enjoyment (Ev and Mary - don't lick your screens!): 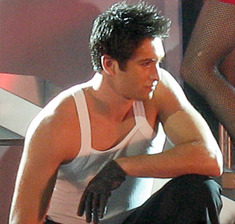 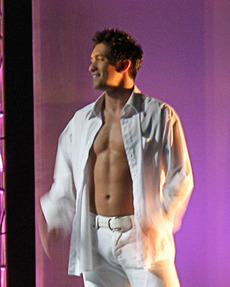 . . . but no. I told him no. He wanted me to run away with him. I know this by the way he caught my eye from only a football field away while singing "Moody's Mood for Love" but I had to break his heart. Poor Elliott. Heh

The American Idol concert was fab! Sandy and I had ever so much fun. She, who had not watched the show much and was therefore completely untainted (except knowing in her soul that Elliott is the best singer EVAH!) thought that Mandisa was the best girl singer and that (behind Elliott, the greatest singer that ever was) Chris was rather talented.

But enough about that. It's soooooo "last week". Next week Ev and I are headed to the So You Think You Can Dance concert, where I won't be running away with Ivan because he's probably jail bait. C'est la vie! Heh

Been a while since I posted, and there's a good reason, but it's not particularly light and fluffy. Not blogworthy, in other words. But stressing out over stuff makes finding the humor in everyday incidents rather elusive. So bear with me. I think by next week things are going to be a lot lighter and a lot fluffier. I have hope!

I beg forgiveness from the good friends whose e-mails I haven't answered (Bridget especially), gifts I haven't acknowledged (Anchen, Allison, Jen), gifts I haven't sent (Bev, Eggs, Jeanne, Drew), a deadline that I missed (K&W) and new friendships that I haven't properly gushed about (Dianne).

I used to use an acronym many years back called TUSH, which stands for: Trapped Under Something Heavy.

I've been a TUSH.

And now for something entirely different . . .

RMQOTD (Help me, Obi-Wan Kenobi. You're my only hope!)

Here's one from last night:

K: We have to figure out when we're going to Minnesota. Changes voice to a passable Seinfeld character impersonation: We've got to see the bay-bee!

J: Concentrating hard: I'm bad with names. Isn't it something like Connor?

J: What is it? Give me the first letter.

K: Yes! I can't believe you didn't remember your own nephew's name. Geez. Speaking of nephews, we still haven't sent Drew's birthday gift. Pauses, and then adds, sarcastically: Drew is your other nephew, by the way. Owen's brother. Julie's other son.

J: I've heard of him. "Drew" is his full name, right? It's not short for Andrew or anything?

K: Thinks to self that she's married someone really special. Special being said with air quotation marks, of course. And not the cool rock star air quotes like that funny comedian who hosted SNL last year. Nope, she's thinking of true quotation marks, changing the meaning of that sentence completely. Changing it to someone really "special". Get my drift? Heh. Continues: I CAN'T BELIEVE YOU! Drew is . . .

J: Interrupting: Because I don't like kids with nicknames for names.

J: Continuing with his train of thought, ignoring his wife: I mean, the practice is fine. I just don't like the kids themselves. Laughs at his own joke.

K: Well Drew is short for Andrew, so you can like him.

J: Yes, yes, I know Drew's name. And he's the son of JULIE (Adds emphasis to show confidence in his answer) and RANDY. Is Randy short for Randall by the way?

J: We should really find that out.

K: We really should.

It's true, by the way, that John is bad with names of relatives. My mother and step-father came for a visit on Sunday and as I asked Mom how Grandma was doing she mentioned that she had talked to Steve the other day . . .

Mom: Steve is Charlotte's husband. Charlotte is my sister.

J: Well we've seen my family a lot more. We haven't seen your relatives nearly as much.

And here's where my own mother looks right past me to gaze adoringly at her son-in-law. I'm pretty sure that Mom considers John to be my single greatest achievement in life. It's true, but geez! Could she PLAY any more favorites?! (Said in a Chandler voice. Switching to Friends now. Keep up.) As further evidence, she showed up with a PEACH PIE! And all because John has raved for years about her peach pies. At least I also love peach pie (although my favorite is cherry). There have been incidents of Mom's homemade oatmeal raisin cookies over the years, though, and I cannot stomach oatmeal raisin cookies.

You do the math.

So anyway, John was brushing his teeth last night when I mentioned how blogworthy the Owen conversation was.

K: Nah. Julie will find it funny. She knows you. Plus, you're such an amusing idiot. I just can't resist sharing.

I left the bathroom and settled into bed with my book. After several minutes . . . (I tell you, he gloats about the way the dentist praises his oral hygiene regimen)

J: Did you just say that I'm a lovable idiot and that's why I should let you share this story? Is THAT your sales pitch?

K: Of course not! I never said "lovable".

And these, THESE, are the types of scintillating conversations I have with John. I'm sure you were wondering.

And speaking of wondering . . .

I wonder how Mom is going to take it when I run off with Elliott after the American Idol concert tonight. Yep, that's right - tonight's the night! Mary couldn't come, so Sandy is coming with me. I'm not sure how much she watched the show, but I'm fairly certain that she'll wear a green Care Like Yamin It bracelet if I give her one. And I shall.

In the meantime, while counting down the hours I can be practicing my new signature all over my Trapper Keeper: Mrs. Elliott Yamin, Karen Yamin, K.F. Yamin, Mrs. E. Yamin . . .

I say Trapper Keeper because it's more universal, but who else had PeeChee's? They were these manila folders with sports images all over them. It was actually on the PeeChees where we would doodle the names of our betrothed. I wonder if they still make PeeChees? This is a conversation I can't have with John because he was an Air Force brat and spent his PeeChee years in Turkey and England, where they probably didn't even have Trapper Keepers!

Ain't the Internet a beautiful thing?

RMQOTD (Listen to me, mister. You're my knight in shining armor. Don't you forget it. You're going to get back on that horse, and I'm going to be right behind you, holding on tight, and away we're gonna go, go, go!)